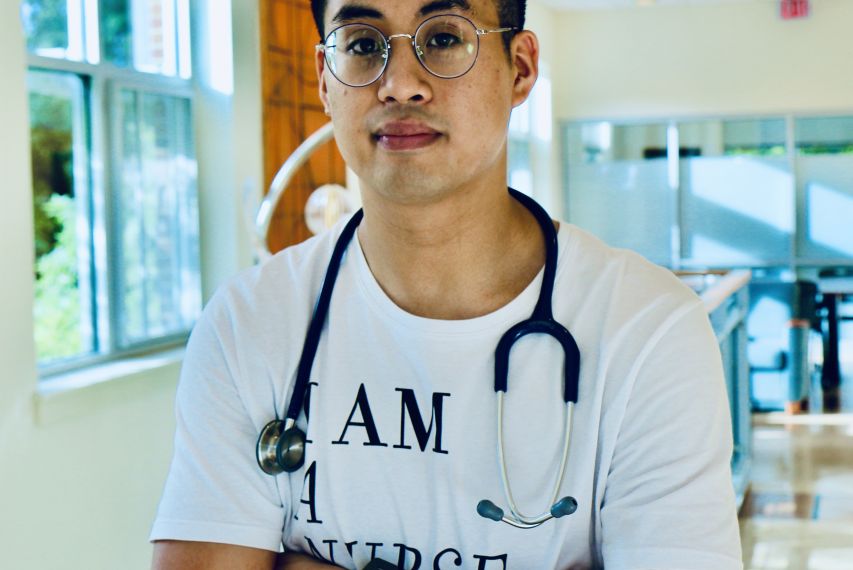 Welcome to the sixth episode of our podcast series. I'm Emily Mellen and I'm here with Ren Capucao to discuss his research on the imbrication of care, race, and place through a history of Filipino nurses in the broader U.S. context. Can you tell us a little bit about your research project?

Yeah, of course. So, in my research project or dissertation project, I studied the history of Filipino nurses through a critical Disability Studies lens. And so throughout the 20th, and 21st century, I'm looking at the ablest construction of Filipino nurses and how they've kind of been pushed towards this idea of perfection as leading towards this neoliberal capitalist global health care system model. And so in doing so, I'm viewing historical archives across the U.S. Some of my chapters focus on Seattle [and] Hawaii, before the 1950s, and then Virginia, post 1950s. And I'm also doing ethnographic research in the Philippines to try to understand the politics of care and the implications of how healthcare is developed and the industry of nursing in a way where it's really catering towards global neoliberal capitalism.

Can you talk a little bit more about how ableism plays into that?

Of course. So, if we go back to the history of Philippines, and colonialism in the Philippines, you see that a lot of the language, the rhetoric, used to define Filipinos has been [about] feeble-minded, or, you know, these backwards inferior people. And so we see, it's interesting to see how nursing plays a role– where public health in general, but also nursing specifically– played a huge role in the colonization of the Philippines. So, we're seeing these American women come in and kind of bring into the world of nursing, these Filipino women, but also men, into values that kind of really, really replicate American ideals of white heteropatriarchy. So, it's interesting to see how these Filipino men and women attain these values and how, if we compare, like their experiences to other Asian and Asian Americans in the U.S. during the early 20th century, how they're able to cross certain barriers that were not that others were not able to. Because of their status as nursing professionals, they were able to maneuver around certain, like racial barriers, gender barriers, and because they had this certain propriety that nursing, the image of nursing, had, if that makes sense. And so we see them kind of…with nursing the way it's socially constructed, for them, it's a pathway of social mobility and to enable migration abroad. And it kind of shifts by the 1950s– When we think about the model minority, Asian America, where it's kind of “Oh, the foreign,” reframing Asian Americans as foreign, as aliens, as invaders, and now we're kind of changing the narrative to use them as a racial buffer amongst races to show that anyone can achieve the American dream in America, and so this idea of perfectionism is very highly attached to the way we think about disability… perfectionism is not possible. It's not. And so with these nurses striving to be hyperable, in a way, to move forward like these are histories that are at least not well understood, I feel in terms of just nurses of color, in general, their histories are not well recorded, but to understand the affect and the struggles that they had to go through to maintain this image of them as nurses to kind of portray themselves as American Nurses, I think is an interesting story. And so, with my research, I think it's trying to really delineate and explicate those relationships.

Oh, man, that's a long story. So it actually begins from my childhood. My mother is actually a nurse. I'm also Filipino and my mom was a Filipino nurse. So, I was raised under her and [because of] generational gaps and cultural dissonance, I actually never wanted to become a nurse, but I always knew that I learned the value of care through my mother. But my journey into this research field has been more so of trying to find my own sense of identity, whether it's professional or cultural, but also trying to understand my parents, the older generations, better. And also trying to figure out these larger issues as I go further into my education and learn about these issues in healthcare, inequities, health inequities. There's so much that needs to be changed, so much that needs to be addressed. The movement of internationally educated nurses across the globe is very complicated. It's a very unidirectional migration from the Global South to the North. But we're focusing on the economics, it's a very economic-focused structure. But we also have to think about, what are the health implications that are occurring? Like, yes, we're solving more shortage issues in these more industrialized countries, but what about the countries that are producing these nurses like, yes, they’re producing nurses, but does that mean, they have enough health care access and healthcare equity, health equity, in their own countries? And the answer, in my honest opinion, is no.

I've been doing interviews or oral histories with Filipino nurses across the globe and hearing so many stories of these nurses and them talking about the death of their families or family members in the Philippines during the time of COVID. And it's very complicated as you obviously, with travel bans with COVID, they can't go back to see their loved ones, their funerals. And it's even the fact that my own family where my dad's two brothers passed away within a week of each other. It's just an annoying fact where there are so [many] health disparities in the Global South, in the Philippines that need to be addressed. I think it's not a shortage of nurses, they have an overproduction, but the overproduction is to satisfy the market needs of other countries. The large question I'm trying to answer with my research is, literally, through what critical disability studies really asks is like, what is the good life for these nurses? And so, those are the kind of questions I'm curious to ask, or at least ask and kind of critique in a way to try to solve some of these issues.

Absolutely. So, how will the CGII funding change your project or allow you to do new things on your project?

It has helped me frame my research more in a global perspective. For my research, I think I was kind of limiting myself to the United States. Like yes, it's a very transnational narrative. I was gonna focus on that. But I think with the CGII funds, its use was going to be towards traveling to the Philippines to conduct my ethnographic research to learn more about Philippine nursing and understand the contemporary and connect contemporary with historical aspects. I just found out too, like a month ago, I received a Fulbright award.

Thank you. So, the CGII funds [will be] focused primarily on the archival research in the Philippines because I feel as if there's much more that I need, that I don't know over there. And the Fulbright will be more focused on ethnographic research at the University of the Philippines in Manila.

Well, that's fantastic. We look forward to hearing how your research goes and the next steps. Thank you for talking with me today.