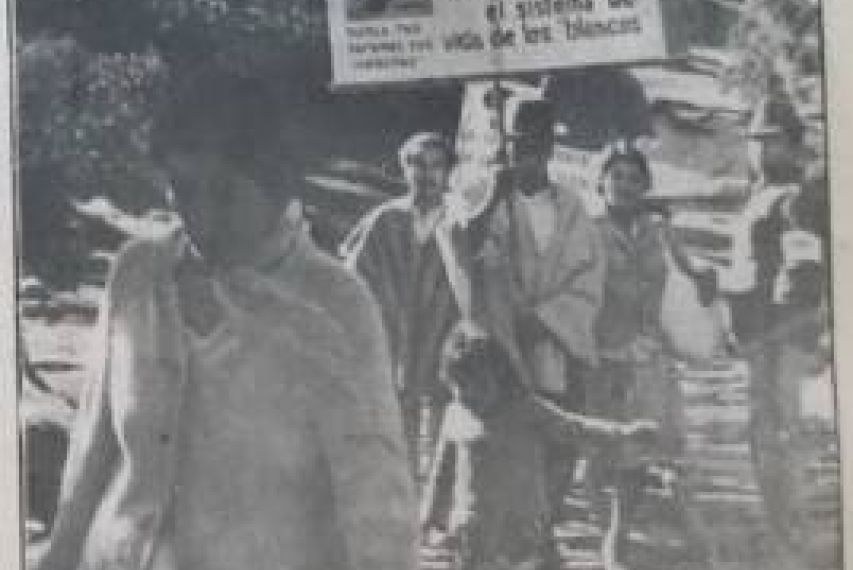 Welcome to Global Research Bytes. I'm Emily Mellen and I'm here with Josué Godoy, who is a PhD candidate in the History department. Your current project “Unidad Indígena continued under the CRIC and later under the National Indigenous Organization of Colombia” addresses the ways that Indigenous intellectuals in the Regional Indigenous Council of Cauca in the 1970s articulated non-Western ways of being in their mobilization of indigenous peasantry to social action. Can you tell us more about the history behind and during this movement?

Unidad Indígena is the periodical used by Indigenous peasants in the 1970s to organize Indigenous peasants. And Unidad Indígena translates to “Indigenous unity” and this moment, in which indigenous activists use the medium of the periodical to help in the organizing of Indigenous peasants really comes out of the peasant mobilizations of the 1960s and 1970s. And so in the 1950s, Colombia is wracked by a civil conflict, which it's coming out of in the 1960s. And this extremely civil conflict takes place particularly in the countryside. It's usually characterized as a conflict between the liberal and conservative parties, but it's a lot more complex than that. But it does take place primarily in the central Andean region of Colombia. And in the context of the Alliance for Progress in the 1960s, as Colombia is coming out of this civil conflict, those in power in the Colombian Government seek to find reforms to alleviate the tensions that led to the conflict. And so, agrarian and political reforms come into play but, especially the agrarian reform, lacked actual teeth to change the unequal structures of land that characterized much of Colombia in the 1960s and 1970s. By the late 1960s, a liberal reformist president Carlos Lleras Restrepo seeks to give the reform, the agrarian reform, a bit more teeth by mobilizing the peasantry to pressure for more active agrarian reform. And this leads to the formation of a sort of national federation of agrarian unions. That becomes really a national peasant union, named the National Association of Peasant Users with the acronym ANUC, ‘A’ ‘N’ ‘U’ ‘C’, and ANUC organizes land invasions in 1971 in response to these half hazard attempts at implementing agrarian reform. More than 15,000 families across Colombia participate in these land invasions, in which they occupied around 350 estates, usually owned by absentee landowners. And it's really a moment in which peasants tried to take agrarian reform into their own hands. And peasants from Cauca, which is in the southwest of the country are also part of this movement, but by 1971 there is an initiative that comes from Indigenous peasants themselves, in collaboration with anthropologists, ANUC activists and other non-Indigenous activists that leads to the formation of the regional Indigenous Council of Cauca with the acronym CRIC, ‘C’ ‘R’ ‘I’ ‘C’. And the CRIC becomes a sort of local or regional union that makes part of ANUC, but we shouldn't think of CRIC as emerging from ANUC, rather it emerged alongside of it. And as peasant organizations, their collaboration and a national peasant movement becomes inevitable. But CRIC is organizing folks, not only as peasants, but also as Indigenous people. And by the third ANUC Congress in 1974, which CRIC is a part of within the Indigenous Commission of the Congress, there is this resolution from the Indigenous activists, which includes Indigenous representatives from other parts of Colombia, from Bolivia, from Ecuador and Panama, to begin publishing, an Indigenous periodical named Unidad Indígena, Indigenous Unity, which becomes to a large extent the voice of the Indigenous in the 1970s in Colombia. And so, out of this Congress in 1974, there also comes out a statement that declares that one of the key points of organizing as Indigenous peasants is that the land is more than just an object of labor or means of production. It's Mother Earth or Mother Nature and from her, according to the statement emerge the cultural traditions and customs of Indigenous people. And so, Unidad Indígena becomes a space for Indigenous intellectuals and collaborators to speak about Indigenous customs and traditions and begin forming a discourse that will make part of the mobilization of Indigenous peasants, not only as peasants but also as Indigenous people who are struggling to gain recognition and respect for their traditions and customs and ways of being and relating to the world that see Earth is more than just an object of labor.

That's fascinating. That's a really interesting intersection between Indigenous forms of knowing and sort of contemporary battles over land and agriculture. How did you become interested in these issues?

So, I became interested in the issue because of the importance of the Indigenous movement in the current political climate of Colombia. I'm from Colombia. And as an example, when I was there in the summer of 2021, there was a national strike that lasted for a few months. And CRIC and other Indigenous organizations were very much involved. And many people saw the Indigenous guard, which is a sort of community guard developed by the Indigenous organizations present in the mobilizations of the summer, and these Indigenous guards actually apprehended multiple agents provocateurs sent from the government to foment disorder in the mobilization in Cali, the city where I'm from. And so, many times the mobilization of Indigenous communities and activists is organized by Indigenous activists as a minga Indígena and the minga is an Indigenous custom of social or communal labor. And so, Indigenous mobilizations come to be called mingas framed under this idea of activism as social or communal labor. And these mingas are present in many mobilizations in Colombia. But in the recent mobilizations from last year, they were there not only as part of protests, but they were also distributing foodstuffs to communities in need in the city, to alleviate the issue with food supplies occurring because of the national strike. And not only in mobilizations but in the current coalition and power right now in Colombia. This is the first leftist government in Colombian history and it just started a few months ago, it started its term a few months ago, and the Indigenous organizations make a part of this coalition. And you can see the influence that these organizations are having, especially in the discourses pertaining to nature and to sacred plants, such as the coca leaf, that are being employed by government representatives on the international stage. So, to a certain extent, Indigenous culture and ways of knowing, ways of relating to the world have gained recognition and respect over the last decades. And part of that process for me comes from the formation of CRIC as the first regional Indigenous council in Colombia, and the use of periodicals like Unidad Indígena to play struggles for Indigenous culture on the stage of political movements that seek to bring change to Colombian society.

So, as part of your project you'll be consulting and digitizing Unidad Indígena in your analysis of this moment in time. What are the benefits and challenges of these methods, of digitization and consultation of a periodical and what are your plans for the digitization? What will you do with it?

Yeah, so, Unidad Indígena really allows me to see the ways Indigenous intellectuals are talking about their traditions and customs in the 1970s, which is a time during which Indigenous culture as such is not really firmly defined, especially because culture is a Western concept that has a poor translation in many indigenous languages. So Unidad Indígena gives an insight into how Indigenous intellectuals are appropriating concepts from anthropologists and non-Indigenous collaborators to organize Indigenous communities around gaining recognition and respect for Indigenous customs and traditions that were seen as retrograde, non-modern or even savagery by the dominant cultures, whether they be liberal, Catholic, or even sometimes Marxist. And in Unidad Indígena, Indigenous intellectuals begin to talk about the need to struggle for recognition of their culture, so, it's extremely important, in my opinion, as a source that allows us to see what Indigenous intellectuals are saying at that time. But as Western historians, sometimes we're really concerned for exact details, such as who wrote this article, who is responsible for the word written here? Where's this discourse coming from? And it's really about a real question of authorship that is seemingly not very important for the authors of Unidad Indígena, because not a single article or issue has a named author. So, that's a bit of an issue that I've been running into, but it's only an issue because of a particular perspective that we might have. And so, it really could just be indicating a difference of priorities where what was really important for the intellectuals behind the articles was the collective struggle for Indigenous recognition. And so, my way of digitizing was really to just go to the libraries in Colombia, particularly in Bogotá, where they had the most complete selection of the issues and taking pictures of them, saving them to the cloud. But then more importantly, I was also able to save the issues into a USB memory that I was able to give to an elder from the Regional Indigenous Council of Cauca, who has been my main contact with the organization. So, being able to work with something that I can digitize has allowed me to not only have the source with me at all times, basically, but also share that source with the people that are my interlocutors, if you will, of the organization.

That's fantastic. And, final question, how will the CGII funding change the future of your project?

Yeah, so the CGII funding really allowed me to go to Bogotá. So, I have family in Cali and going to Cali for research is a lot more financially easy. But no libraries or archives in Cali had the periodicals. So, being able to travel to Bogotá with the funds from the grant was really fundamental in developing my answers to questions I had about the struggles for Indigenous culture, questions which really revolve around understanding what was meant by struggling for culture and autonomy. And so, without this grant, I would not have been able to access the periodical, let alone digitize parts of it. And the periodical is really the central primary source for my argument, which is that Indigenous intellectuals were using this concept of culture to organize Indigenous people around defending the rights to develop and organize their communities, on their own terms, in an environment where Indigenous customs and traditions are not ridiculed as non-modern, retrograde or savagery. So, I was able to do this while also being in, I guess, face-to-face contact with the interlocutors in Colombia instead of just talking to them over the phone.

That's wonderful. Thank you. I look forward to hearing more about this project as it develops and thank you for talking with me today.