From CAA to Lockdown in New Delhi 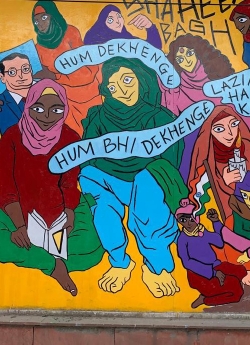 As I look up at the empty April sky from the rooftop of our flat in South Delhi’s New Friends Colony, I remember the twinkling lights of airplanes as they flew past with an assuring regularity after taking off from Indira Gandhi International Airport. It was a busy world. Airplanes loaded with passengers from across the globe; some returning home, others on holiday, many on business trips. Now, I see birds returning; sometimes swarms of them. The Venus shines bright in quietude while my heart aches. There is a vine with clusters of pink and white flowers associated with my childhood nestling on the balcony. I take lots of pictures every day. I post a few on social media.

Moving into this spacious flat in South East Delhi’s New Friends Colony’s leafy enclave in the first week of the New Year, we looked forward to a whirlwind spring semester. Protests against the discriminatory Citizenship Amendment Act (CAA) were raging. Violence had broken out near New Friends Colony on December 15 as unidentified persons set fire to buses and indulged stone pelting.

Police rushed into the nearby Jamia University campus, stormed into the University library, beating and teargassing students who were studying for ongoing exams. Consequences followed. The pushback from students at this brutality grew into a movement—against the CAA, against police brutality, against discrimination.  A group of student activists dug in their heels, set up an improvised camp blocking the common road. 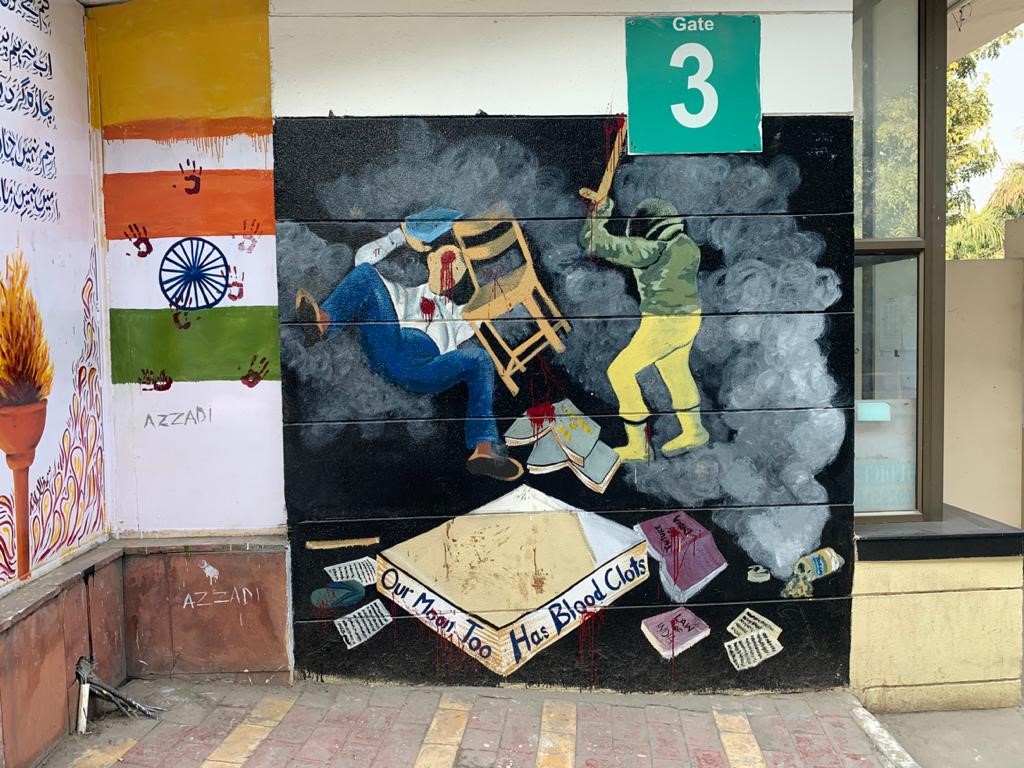 Graffiti of protests on Jamia campus Photo by Richard Cohen

Artists of all stripes flocked to the sit in. Arresting graffitti adorned the campus walls. Evenings drew crowds of listeners who shouted passionate slogans in response to fiery oratory. The ambience was electric in the winter chill. Although the university shut down for winter vacations to subdue the protest, it was carried on with intensity. I found it heartening to see both male and female students actively involved in the demonstrations throughout the period of closure.  We didn’t see any reason to stop our own UVA students from continuing with the Spring in India Program. Our students arrived in Delhi by January 12 and settled into the Maulana Azad Guest House at Jamia Millia.

The guest house is located deep inside the campus, safe from wayward mobs that could be driven by unforseen police action. It echoed the edginess and frenzy of the movement in muted ways, especially at night, when the stillness around it could be shattered by loud reports from firecrackers burst at wedding processions.

Our students (some of them travelling overseas for the first time) handled the mayhem with caution. Then there was a shooting on the street close to the protestor’s camp. A Jamia student was shot in the hand as he grappled with young man with a gun who had decided to show his disapproval of the protests. Unfortunately, communal, sectarian colors had begun to tinge public reaction to the protests. We had started holding classes at the guest house by late January. Jamia was still rescheduling exams from the previous semester.

There was another important anti CAA protest led by the women from a neighborhood close to Jamia called Shaheen Bagh. The atmosphere there was heady; women, children, grandmothers sat under a colorful tent talking resistance.

Graffiti of Shaheen Bagh where women, children, grandmothers sat under a colorful tent for peaceful protest. Photo by Richard Cohen

Here we saw the solidarity of secular India. Peaceful protests are not new in India, yet this particular one with women at the center stage drew a slew of emotions from supporters and detractors. Our student facilitator from Jamia lived in Shaheen Bagh, he invited our students to visit. Meanwhile, we continued classes at the guest house till the end of February, that is when Trump visited India. (But I will save that experience for another post.)

Communal riots broke out in North Delhi and the death toll began to rise as teaching began at Jamia. The situation was bizarre to say the least. We at Jamia were in South Delhi in a so-called safe zone but the news was distressing. It was unadvisable for our students to leave campus and go to their internships.

Spring Break was cancelled in order to makeup missed classes. Restlessness was brewing again as the festival of Holi was celebrated on March 10 without the usual colorful revelry.  Now, the virus was raising its spiky head, rapidly transitioning borders, slipping through boundaries, sickening and endangering lives.

On March 13 we were advised to return home to the US.  It felt unreal, in the moment, as if a boulder had dropped from the sky smashing hope. There was the urgent need to sit down together and talk it over. We invited the students over to our flat, there was no lockdown yet. No one seemed ready to leave, but over the next week they left one by one.

About the author: Mehr Farooqi is associate professor in the Department of Middle Eastern & South Asian Languages & Cultures at UVA. She was leading the UVA in India spring semester program before it was cancelled due to COVID-19. She is under lockdown in Delhi, India.