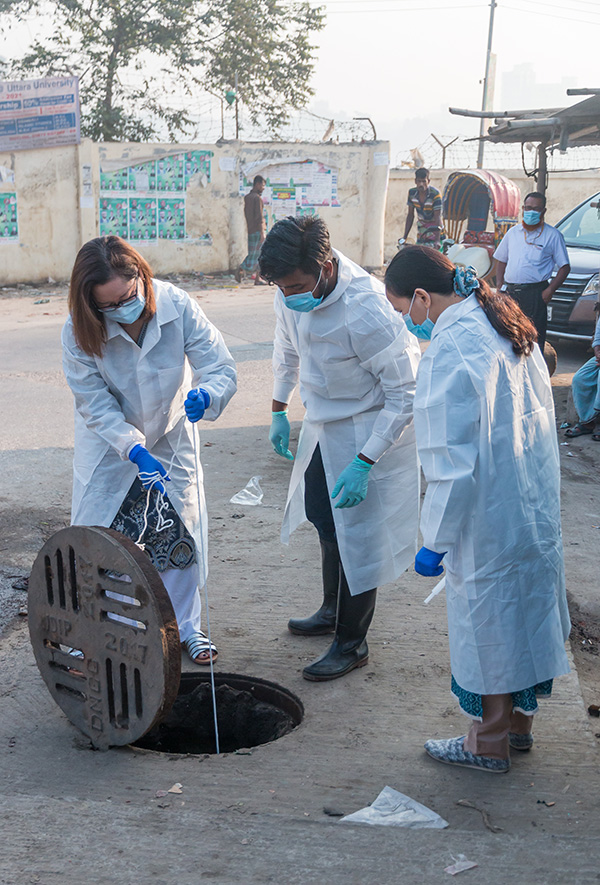 University of Virginia health researcher Mami Taniuchi and her collaborators at Aga Khan University have received $6 million grant from Bill and Melinda Gates Foundation to implement an integrated sewage and clinical case surveillances in Karachi, one of the largest cities in Pakistan for multiple diseases prevented by vaccine like SARS-CoV-2, poliovirus, cholera and typhoid.

This grant with 2.1 million to UVA will allow her to work closely with her Pakistani colleagues to establish environmental surveillance of wastewater which will help complement disease-based surveillance for enteric pathogens in the hospitals.

“This grant will allow us to efficiently capture community transmission of multiple diseases,” said Taniuchi who has been working on a similar model in Dhaka, Bangladesh over the last year. “Current gold standard methods for disease surveillance are for the most part is case-based, and looks for a single disease at a time.” What Taniuchi is suggesting with the integrated sewage approach will revolutionize and streamline disease surveillance by focusing on multiple diseases in one go and on community level transmission without the need to test many individual cases. .

In March 2020, Taniuchi tested archived samples from an ongoing study in Dhaka, Bangladesh and noticed that not only were they able to see evidence of the coronavirus virus in the sewage sample from as early as December 2019, but they were also able to detect the increase in cases a week in advance of the spike in the neighborhood. She realized that their system could act as an early warning system and pinpoint hotspots of community transmission of COVID-19.

She is working with researchers from icddr,b, Imperial College London, and many Bangladesh government officials from Institute of Epidemiology and Disease Control Research, Dhaka North City Corporation, Directorate General of Health Services, Department of Public Health Engineering, and Dhaka Water Supply and Sewering Authority. Along with Dr. Isobel Blake, an epidemiologist from Imperial College London, she mentored a talented 4th year Biomedical Engineering Capstone team from UVA to develop a one of a kind dashboard to capture the sewage and case data to aid Bangladeshi public health stakeholders in mitigation efforts. The dashboard can be found at http://dhakacovidtracker.uva1acsf.acsitefactory.com/.

The project in Karachi is in its initial planning phase. The researchers are looking to implement the study in Gadap Town area in Karachi where the researchers will collect sewage and clinical samples weekly to detect transmission of diseases.

“Pathogens are present in low amounts in sewage samples, so we concentrate the samples to be able to detect them,” said Taniuchi explaining the method which has been developed and validated in an earlier study in Bangladesh. Based on the study, they plan to develop a mathematical model to understand the relationship between the signals found in sewage and burden of the disease in cases.

“The explosive emergence of COVID-19 has highlighted our inability to detect the emerging diseases early when cases are low,” she said While sewage surveillance is not a new technique (it’s been in use for a long time in the polio endgame as a complementary surveillance to the case surveillance, Taniuchi says that it has the potential to serve as a sensitive early warning tool to capture community transmission of a disease and a complimentary surveillance to fill gaps in clinical surveillance.

“This is a perfect tool for countries like Pakistan where the burden of these diseases is high and the disease-based case data is incomplete.”